Does Gold Offer The Ultimate Insurance During Economic Turbulence?

Since the beginnings of civilization, gold has always been viewed as a safe asset. Gold is scarce and can be hedged against inflation. However, financial pundits generally advise against investments in gold or silver, as they don’t offer dividends and regular income. In order to receive a return with these type of investments, the price has to be revalued to make a positive gain.

Gold as a Buffer

Gold has great value and can be a buffer during financial turbulence, but it cannot be compared with conventional assets like stocks or bonds. Being uncorrelated, when stocks start falling rapidly, gold may not react in the same way.

Usually an investment portfolio consists of 60% stocks and 40% bonds to create diversity and security. As they always say, never put all your eggs in one basket. By diversifying your portfolio with bonds, it can mitigate the risk against loss through stocks and they themselves are not likely to show huge capital losses.

Gold or silver in a financial portfolio offers many benefits when added to your diversification mix. During financial crises, these investments can help limit the losses occurred from bonds and stocks.

However, it does come at a cost as the average return of gold and silver investments will be lower, as compared to the traditional 60%/40% mix of stocks and bonds. Investing in precious metals is an insurance, offering protection during stress filled periods, but it comes at a price.

Rebalancing of a portfolio is normally done during January or after major changes in asset prices. Investors can purchase lower priced assets and sell their higher priced ones while maintaining their same 60/40 mix. Gold investments must follow the same rebalancing as it helps keep the allocation steady.

Adding Gold: What is the Cost?

Data showing the performance of different investment combinations throws more light on including gold in a portfolio. Beginning from December 1987 till October 2016, it was seen that the average return was 8.12% with investments in stocks and bonds in 60/40 portfolios.

This shows that gold has improved average returns, when compared to the return of stocks. This is mainly due to the financial turbulence of 2008, when stocks and bond prices were in free fall.

Adding Silver to the Portfolio

In addition, the gold and silver combination in a portfolio has offered higher average returns when compared to the conventional 60/40 (stock/bond) investment returns during the past ten years. When gold and silver were added to the portfolio by 5%; 10% and 25%, the returns increased by 0.18%; 0.35%; and 0.77% respectively.

By looking at the two most recent financial crises of 2001 and 2008, we can get a clearer picture on how gold can be an insurance against negative market influences. We have already shown that over a 30 year period, gold has a relatively low cost in terms of lost returns. Whereas in the case of a shorter term, past 10 years, the addition of gold and silver has resulted in increased average returns.

Most importantly, when stocks were at their lowest point in March 2009, compared to their previous high point, the DJI had showed a negative return of 47%, whereas gold showed an increase from its earlier all-time high with a return of 38%.

The same pattern was seen during the financial crises of 2001, when stocks showed poor returns, whereas gold showed good returns. The data below shows that gold had positive average profits of 8.39% during the period from 2001 to 2002. It performed on average 20.32% better than stocks during this two-year period. When adding a 25% mix of gold to a conventional 60/40 portfolio, the average returns were increased by 2.85%.

These examples show that gold can rebound the negative effect of market crises. An insurance of this kind would not have been necessary if we could foretell the time and duration of stock market sell offs. However, since this is not the case, diversification of asset allocations should be done in such a way that there is as little correlation as possible between the assets.

Normally, when following a model for portfolio rebalancing, you would sell assets that have risen in price and buy those that have come down. However, if all assets of a portfolio have fallen by different amounts, then some assets would be bought cheaper and others would be sold at a loss.

Gold shows no correlation to stocks or bonds, so it is possible to sell gold in your portfolio at higher prices and buy stocks at lower prices. Following this formula would result in an increase of income when practiced systematically. 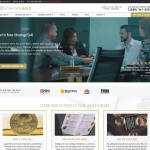